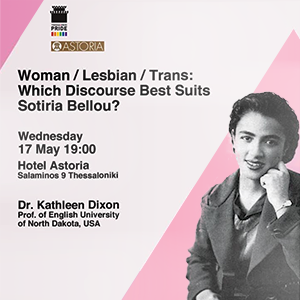 Thessaloniki Pride on the occasion of the International Day Against Homophobia and Transphobia is honoured to host a lecture-discussion by Dr. Kathleen Dixon, Professor of English at the University of North Dakota.
Dr. Dixon’s research considers the question of how rembetiko singer Sotiria Bellou (1921-1997) was able to become a national Greek icon, while openly conducting homosexual affairs and sharing her domestic life with another woman.
Public acknowledgement of homosexuality, especially among women, was rare in Greece during the period of Bellou’s life (Kantsa, “Daughters Who Do Not Speak,” 2000).
Professor Dixon’s method of inquiry is an analysis of the intersecting discourses of gender and sexual orientation in late 20th c. Greek culture, together with those of rembetika and laiko entechno tragoudia (art-popular music) and Greek nationalism of the second half of the 20th c.
The event will be in English.
Astoria Hotel is the proud sponsor of the event.